It’s getting more and more difficult to surprise contemporary cinemagoers and gamers with the latest-generation video and computer games technologies. But if you are fond of action and disaster movies or flying in virtual universes and wars or you keep looking for something new and amazing to really surprise you, tickle your nerves, and deliver the maximal wholeness of visual and tactile sensations. 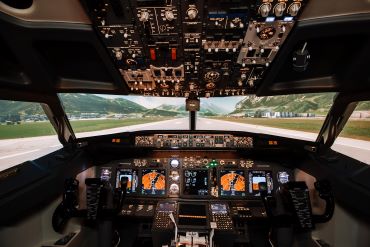 If you are keen on aviation-themed movies and games, extreme air sports and plane crashes you can hardly be surprised by Microsoft Flight Simulator X, Aerofly FS 2020, X-Plane virtual flight simulators or computer arcades and shooters. 3D films are past history too.

Even virtual reality glasses and the 5D & 7D cinema most advanced technologies with augmented reality through tactile sensations and the seats’ motion and vibration are the types of entertainment that will grow to be boring. All these engineering marvels lack the essential thing as you either remain a passive spectator or are limited by the games’ feature set. 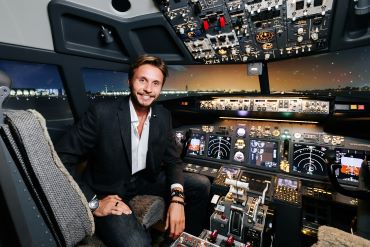 Аnd how about taking a ride on a Boeing 737 NG?

If you are no longer excited by the augmented reality technologies let's take a step forward and take a flight on the Boeing 737 NG flight simulator airliner with the full effect of presence. This is a full-size cockpit with the true-to-life dashboard and flight controls. This is a maximum extent realistic flight, and you are a primary and active participant of the ongoing adventure.
This flight simulator is a genuine adventure with full immersion into the flight reality where you play the role of an active hero and director of your own action movie.

Where do we fly to today? Intended flight routes.

Just one single flight session will make you realize that being a movie hero is not exactly an easy task. To begin with, simply try and take off from the Dubai airport runway, fly all over Dubai and perform the landing. Even with an instructor pilot, it’s quite a “movie”.
You may choose any heading at your discretion. 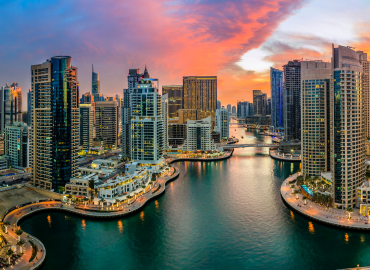 Dubai from a bird’s eye view.

This is both a training flight with a full set of true-to-life pilot actions and a scenic air journey across the sights of one of the most beautiful cities in the Middle East. A superb business centre, the emerald-water bay with harbours for luxury yachts, gorgeous hotels with beaches, exotic man-made archipelagos of Palma Dira, The World, Palma Dzamira and The Universe. The world's tallest 160-storey skyscraper (828 m) Burj Khalifa is a must-visit place. It’s the one the American spy Ethan Hawke (Tom Cruise) climbed at the 120th floor level in part 3 of the "Mission Impossible: Protocol Phantom" blockbuster.

As soon as you get the feel of the controls and instruments responses and master your take-off and landing skills you can move on to your next movie where you are piloting the aircraft flying from London to Paris – the flight route known as the very first international route in the history of aviation. Recall Ken Annacken's old comedy action movie “Air Adventures” featuring the first planes pilots who set off for an air rally across the English Channel to win the “Daily Post” prize.
Certainly your "movie" has little in common with the events narrated in the film and dated back to 1910, and you operate the yoke of a modern airliner and not the old plywood biplane’s levers, and the flight will take just one hour instead of the whole day but you’ll get a bunch of impressions!

Your take-off from the London City airport located next to the centre of the British capital will be very beautiful and almost "cinematic" – over the Buckingham Palace, the Tower Bridge, the London Ferris Wheel and the great Big Ben. And while approaching the Charles de Gaulle Airport for landing you will definitely see the Eiffel Tower. 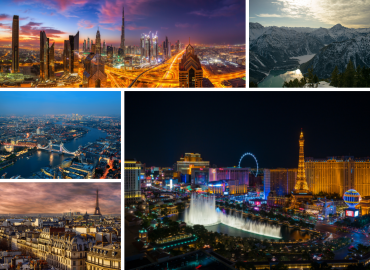 You’ve seen the Los Angeles take-offs in dozens of American movies as well as the flights over the Santa Monica and Hollywood Hills beaches (the “Bad Boys” and “L.A.P.D.” movies). Then you’ll spend 40 minutes flying over the Mojave Desert (the "Independence Day" and "Top Gun" movies) to be followed by a graceful landing at Las Vegas, the city of skyscrapers, gamblers and casinos, aglow with lights.

The landing will certainly be not as smart as in the "Flying Prison" starring Nicholas Cage and John Malkovich where Earl "Swamp Goblin" Williams, the hijacker, landed the heavy C-123 "Jailbird" straight on the casino but the sight of the capital city of the American gambling industry is gorgeous anyway.

It’s a rather complex route with a moderate start-off as the take-off from Munich is not difficult at all. But then you will have to fly over the Alps in the low cloud cover, glaring snow peaks just 50 meters off the cockpit, fall into the clouds to then fly onto the mountain valley, over the rocky passage and land at the Innsbruck ski resort. 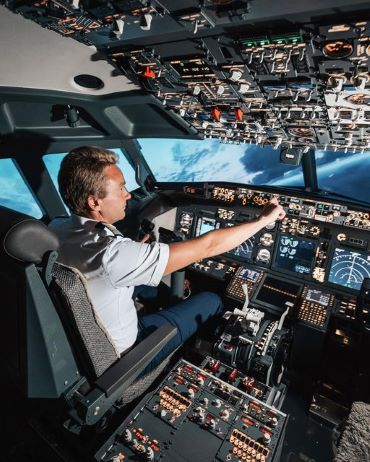 This is when you recall all airplane disaster movies at once, “The Rock Climber” starring Sylvester Stallone and “Lost in the Andes”. You are certainly not exposed to a plane crash but the maneuver cycle within the complex landing glidepath will definitely tickle your nerves and make you fully immerse into controlling the aircraft during the final flight phase.

This is another "adrenaline flight" that starts off at the still and calm airport of the Montenegro capital city. A short flight over the mountainous Balkan country will give you the chance to feel yourself Ted Stryker in the famous "Airplane" movie directed by the Zucker brothers and Jim Abrahams as you will have to land your aircraft at the Tivat resort, one of the most complex airfields in Europe.

The picturesque valley around Tivat is unbelievably beautiful. The plane steeply "dives" into it straight from the clouds to then make a thorough turn over the Bay of Kotor, promptly descend at a 20 degree angle and smartly touch the landing runway. Even experienced pilots admit that this is not easy at all due to the strong turbulence, sidegusts and crosscurrents. You will have to land the plane in foul weather - with poor visibility and stormy winds. The wet from sweat shirt, bounding pulse and trembling hands are guaranteed.

Want some more extreme? Well, you can take a flight in a thunderstorm and overcast or undercast, add the cockpit on fire option or engine failure. These scenarios however require expertise and flying practice on a flight simulator as well as good knowledge of the controls, quick reaction and prompt decision-making.

A flock of birds flew into the engine of your aircraft and there is no time for an emergency landing at the nearest airport. What would be your choice? The emergency water landing on the Hudson River, NY. Congratulations! Now you are Chelsea Sullenberger, the pilot, and must perform a water landing to save the lives of 155 passengers. And this is as realistic as next to real.
Follow the series of articles:
The TFT.aero Boeing 737 high-tech attraction in Dubai scow is an unforgettable experience:

Dubai’s “adrenaline” attractions
Just because we are pilots.