This fancy term is used to refer to the simulator’s pretty simple component, which is a screen with a picture of what the pilot sees from the cockpit. Several technical implementation options exist, each of which is determined by the way in which the simulator is expected to be used. Systems may be very simple and inexpensive or complex and pricey. Each design has its own functional and technical limitations and cannot create a truly faithful picture, which, in all fairness, is not required.

It would be wrong to claim that a picture of the outside world is not required at all. We’ll tell you the stark truth. Pilots need a picture during acceleration on the ground and take off and again a couple of minutes prior to the touch-down. Before take–off and landing the pilots have to make sure they keep the plane on the central white line of the runway. In addition, they need a clear runway, with no obstacles. That’s all they have to see to control the plane. Pilots are not there to admire the airport terminals or the fluffy clouds.

For take-off acceleration and braking the plane upon touch-down the pilot controls the aircraft with twin pedals, and normally TFT instructors will correct the customer’s actions. Well, windows may come in handy for taxiing, but the automated systems of some present-day aircraft can handle this more efficiently than the pilots. Otherwise, a window is good for nothing. Indeed, what can you see at night or in dense clouds? Please note that we are talking about commercial airliners, rather than small aircraft, which are flown per visual flight rules.

So, we understand that a visualization system is only required for a limited time. Now, let’s see what visualization types exist and where each may be useful.

The simplest way to visualize the outside world would be to place one large flat monitor or several mid-size ones in front of the simulator. 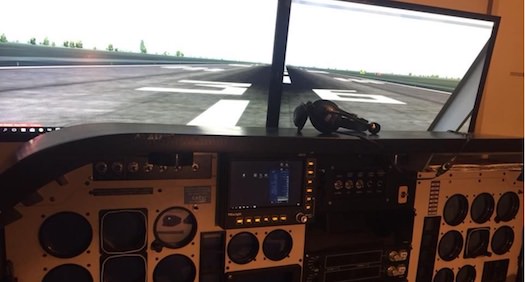 This solution is equal to its primary task and should be used for a one pilot configuration. Where does the pilot see the center white line? As an extension of his direct line of vision? Or shifted to the side relative to the cockpit center? A weakness of this approach is that the pilot can see the monitor, and his field of vision is limited by the size of its screen.

More advanced users create something like a panoramic view by placing several monitors at angles side by side. This is what it looks like: 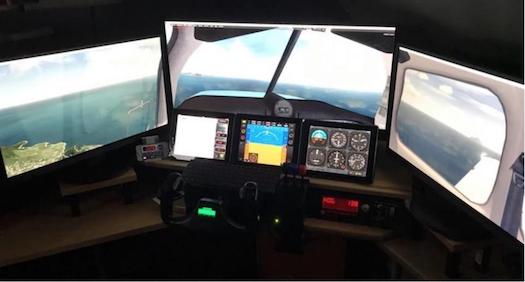 There is software which smoothes out the horizon. The example is a good demonstration of the approach.

The most advanced solution would be to dispense with monitors and use projectors and a screen. Normally the screen is spherical or cylindrical (wrap-around screen). The choice does not affect the result. The picture is seamless, the horizon is a straight line, while the amount of detail is determined by the capabilities of the hardware and software. Since projectors rely on a matrix to generate an image, its grain characteristic will be a function of matrix resolution and distance to the screen. Below is the ideology of this option:

Unfortunately, all the solutions above have one defect. They do not let the pilot feel the depth of the image, since it is only 2D.

This is a picture of a Cyclops, and what he and the users of all of the above visualization systems see is a flat picture. Their eyes cannot measure the depth of the image, as the viewing surface is flat. Unlike the Cyclops, humans’ vision is binolular.

The developers of the professional simulation systems could not accept the flat picture concept for many reasons. First off, the pilot should be able to assess the plane altitude when he raises the nose just before touch-down, to avoid crashing the plane onto the runway. Secondly, in a two-pilot crew each must see the runway white lines straight ahead instead of to the side. Developing false skills during training is unacceptable, and the engineers were bailed out by optics specialists, who knew it all.

Professional flight simulators incorporate a collimation visualization system, in which a spherical rear projection screen is reflected in a spherical mirror. It was found that in this configuration the reflected rays of light are parallel, thus giving the image the required depth. The inquisitive reader may want to read up on parallax for in-depth information. 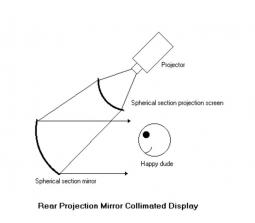 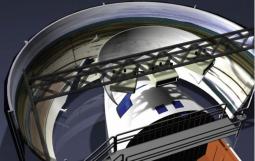 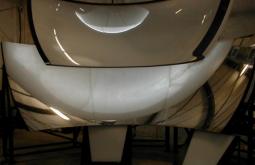 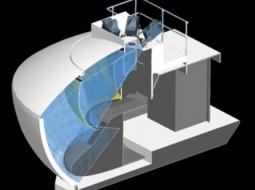 Irrespective of the components, the system incorporating a mirror is technologically difficult to manufacture and extremely costly. Its many components in sum may carry a price tag of up to 1M USD, which precludes its use for entertainment.

In wrapping up our brief review, we will say that simpler solutions used in entertainment flight simulators are by no means inferior or less than perfect. Strangely enough, created with entertainment in mind, they are more colorful and offer a greater degree of detail than professional training systems. Don’t let it go any further, but in a real aircraft, visualization at cruising altitude may be worse, due to mist, failing light, atmospheric dust and many other reasons.

A test for you. The picture at the head of this article. Was it taken from the cockpit of a real aircraft or from our simulator?