Many of you have seen the cylinders under the flight simulator organized into a semblance of a pyramid. This structure has as many as six legs and is called a hexapod from Ancient Greek Hex (six) and Pod (leg). 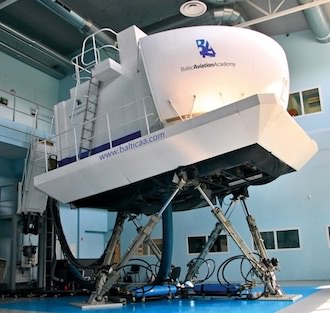 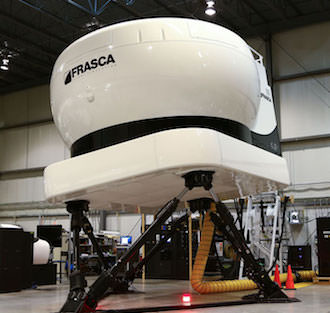 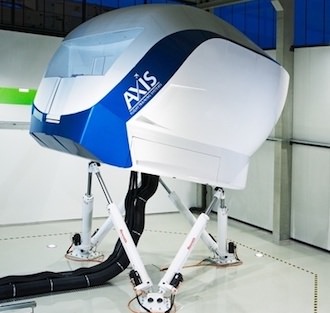 Years after the Greeks came up with the name, the scholars Gough and Stewart developed a mechanical platform with three or six legs, which is now widely used in engineering projects.

Here is a somewhat more detailed description of the structure consisting of six cylinders attached in pairs to three positions of the platform’s baseplate, crossing over to three mounting joints on a top plate. 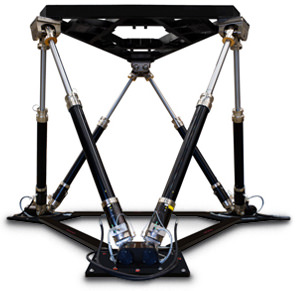 The cylinders may have multiple designs and operating parameters. One common feature, however, is their ability to vary, by telescoping, their length between the joints.

The various combinations of cylinder lengths help tilt the upper platform in three linear and three rotational movements. Each direction is known as the degree of freedom and underpins the full motion platform’s design type. From the above, the reader should understand that the lower base is always immobile, while the upper platform can move.

Depending on application, the cylinders may be designed as hydraulic jacks, pneumatic jacks, or electric actuators. Platforms may be different in size, payload, speed, motion precision and many other parameters, which are determined by intended use.

Full motion (full flight) platforms are widely used in amusement rides and flight simulators as an addition to re-creating the outside-world visual scene. Besides the visual images, the trainee will experience the simulated effects of the G-force. Inside the simulator the customer cannot see the tilting platform, but can feel its movements and translates them into what he perceives as aircraft movements in virtual reality.

The illusion of any movement in space is created by the pilot’s inertia relative to the pilot’s seat or by the difference in the forces affecting the pilot and his seat. We should make a reservation up-front by pointing out that there is a simplification here, which we allowed for the sake of clarity. For the purpose of the flight simulator we will analyze three aspects – where the plane is moving, where the body of the pilot is moving, and what the full flight platform is doing.

The computer controls the changes in the telescopic cylinders’ length. As a result, the upper platform creates respective acceleration, which is transmitted to the pilot seat. Most of the time, such brief movements are sufficient to create a credible impression of being affected by a small G-force, the way it happens inside a real plane. No ground-based technology is capable of creating zero gravity for more than a few fractions of a second. Normally, deceit is resorted to, to create a physical illusion. If and when gravity is finally conquered, weightlessness could be created inside a simulator.

The full motion platform can generate some real acceleration, but only for the duration of the cylinder changing its length. To create a more lasting effect, the platform is tilted back for a longer time, and the human vestibular labyrinth thinks it’s G-force, while in fact the customer is tilted back or sideways in his chair.

Well, let us now take a look at what really happens:

The plane is at the edge of the runway, the pilot adds power and the plane starts rolling. The pilot and passengers tend to remain stationary, but the plane pushes them forward, along the runway. This happens on the ground, without any up or down movement. So the pilot and passengers are just pushed against the backs of their seats. For this effect we need to tilt the cockpit back, while the picture of the world around us remains horizontal. 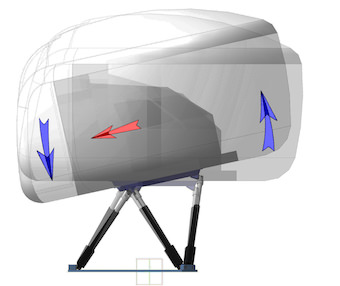 Upon reaching the lift-off speed the plane continues to accelerate and lifts off the ground. The platform tilts the fuselage accordingly (we’re flying up) and moves up. The climb rate is constant (like in an elevator), so the passenger only feels the onset and completion of the climb.

Normally, the pilot and passengers do not feel the small changes in the climbout speed. It is known that at the climbout stage of the flight, anxiety only overtakes people who hate flying and tend to listen for changes in the engine noise intensity. From time to time, when engine noise becomes less intensive the plane seems to level off and a split-second weightlessness sets in. Not quite as bad as resulting in people hanging in mid-air on their safety belts, but the plane appears to have lost some altitude. The platform copes with flying colors. What happens is this. The plane does not always climb in a straight slanted line. Sometimes it does so in a staggered line with incremental speed increase. The picture shows that once the plane has reached the prescribed altitude, the pilot pulls back power, and the plane flies horizontally, while inertia continues to carry the pilot and passengers upwards. Inside the plane, and the flight simulator, the seat seems to be sinking, reducing the “upward” pressure. 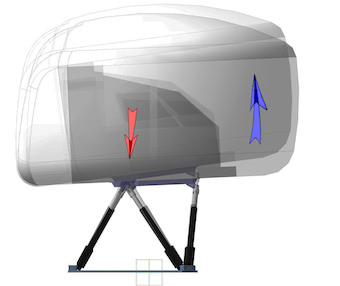 The flight’s principal elements should not obscure lesser things. Even when parked on the ground the plane will not be totally motionless. In windy weather wind gusts make a huge sail out of the plane’s rudder and cause the plane to shudder. When taxiing the plane responds to bumps on the taxiways and turnarounds, to braking and to starts from stand-still. In various situations these effects may be pre-programmed or implemented in real time via all six of the platform’s degrees of freedom.

Zones of turbulence (air pockets) are a result of changes in the wing lift , with the corresponding movements of the plane up or down. Occasional lateral buffeting is also possible. As was pointed out above, protracted real acceleration is not possible to reproduce due to technical limitations.

Certain other effects may include vibration resulting from the use of air brakes, deployment of leading or trailing edge flaps, or lowering the landing gear.

Descent, as well as the climb, is a staggered process and is duplicated by the simulator. Landing is a combination of many effects, of which two are special. They include touch-down, which is represented by the platform as an upward jerk, immediately followed by a forward tilt of the platform, to imitate braking. As the plane rolls along the runway the pilot will correct deviations from the center white line and stir the plane accordingly. The simulator responds by swerving right and left. This effect is particularly noticed in the plane’s front and rear seats. 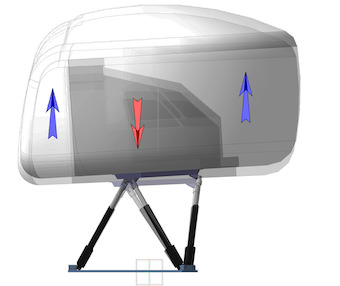 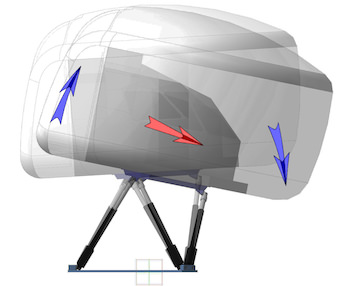